Behavior scripts utilize JavaScript to make things happen. They can manipulate the object graph, work with central systems, as well as send and receive messages between other scripts.

Select Scripts from the library drop down menu. Then click the + button next to Scripts. This will prompt for a Name to give the new script, a Description for the new script (this is optional), and a Type for the new script. Make sure Behavior is selected from the type drop down menu. Once these fields have been populated, click the Create! button at the bottom right of the library panel. This will create a new Behavior script in the script library with the input name and description.

Create or select an asset element you wish to attach a script to. At the bottom of its inspector, you will see a box that says Drop script here. From the script library, click and drag your script to the script section of the inspector and place it on the target box.

Once you have written or made changes to a script, you will have to save it to see its effects in the canvas. To save a script, click File > Save. Saving a script will cause the canvas to reload the script.

Behavior scripts have 3 main phases: enter, update, and exit. These are known as the Lifecycle Functions. You may use all or none of these functions in your script.

If an enter function is defined, it will be called once and only once after all scripts have been initially executed. This is generally a safe place to manipulate elements created through other scripts, as all scripts are guaranteed to be loaded by this point.

If an exit function is defined, it will be called right before the object is destroyed. This is often used to turn off systems enabled within the script or to return elements modified by the script back to their original states.

All new Behavior scripts will be created with an enter function and an exit function. 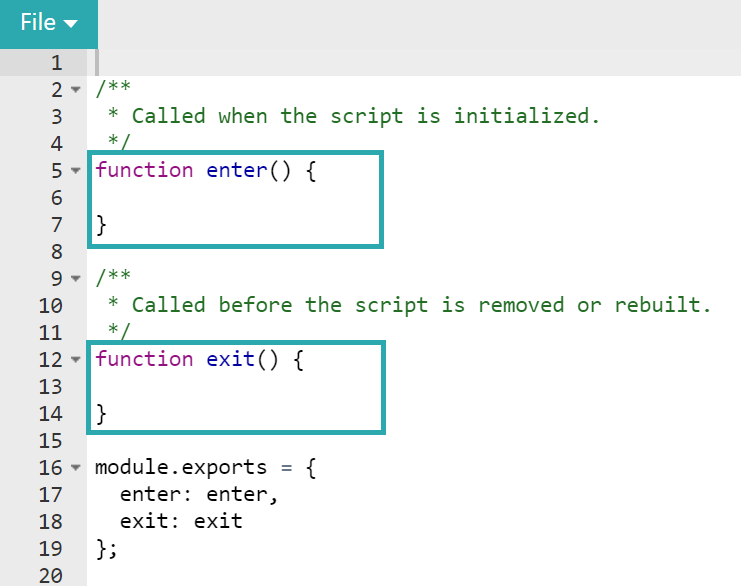 All scripts are wrapped in functions to prevent name collision in the global scope. Because of this, all functions that should be exposed to other scripts, including any used Lifecycle Functions, should be exported on a module object passed in by the runtime.

All new Behavior scripts are created with a module object exporting its enter and exit functions. 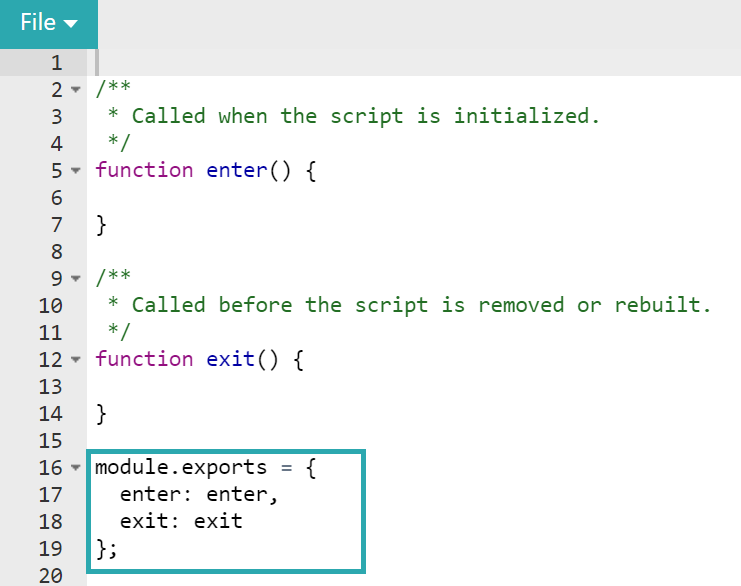