Do you use Enklu Cloud for your rapid prototyping needs? Are you interested in editing your CAD files in the web editor, without the extra hassle of exporting them from Unity?

And this is only the beginning! We'll be continuing to update Enklu Cloud to accommodate more and more CAD formats as time goes on. So if you use a format that isn't represented above, please contact us!

Aside from CAD support, we've also added better video support in 2020.11. You can now upload the following video format directly to Enklu Cloud:

You can also directly embed video URLs into your projects using VineML.

Note: Videos currently will not play in the web editor, but they will play as expected on supported devices.

In this update, we've revamped the entire My Experiences screen, making it faster than ever to find and create experiences! Not only can you create new projects and modify existing ones, but you can also search for them directly.

We've also added user portraits on each experience card to tell you who has access to a file (you can check their names on mouseover).

Finally, we've also added the ability to sort your experiences by either Name or Recent Activity. No more are the days of spending minutes chasing down a file you just started working on!

We've added a bunch of new Public Scripts in 2020.11 that makes building interactions easier than ever! These Drag & Drop scripts allow even the least technical of folks to create complex simulations or immersive content.

To use one of these scripts, create a new asset and drag one of these over to the Script section of the Inspector. You can then adjust different parameters, like the icon or color of a button, in the Variable window. Most importantly, you can also decide what event an interactive element reacts to and what event it broadcasts on completion. You could create a button that pulls apart a motor, or a proximity trigger that reveals a hidden message!

Building on its official debut in 2020.10, we've added a new feature to Web Play mode: hand interactions! You can now simulate basic hand interactions directly in your browser without needing to put on a HoloLens.

As of 2020.11, the names of a script now appears on the same line as the File button, right under the Script tab. 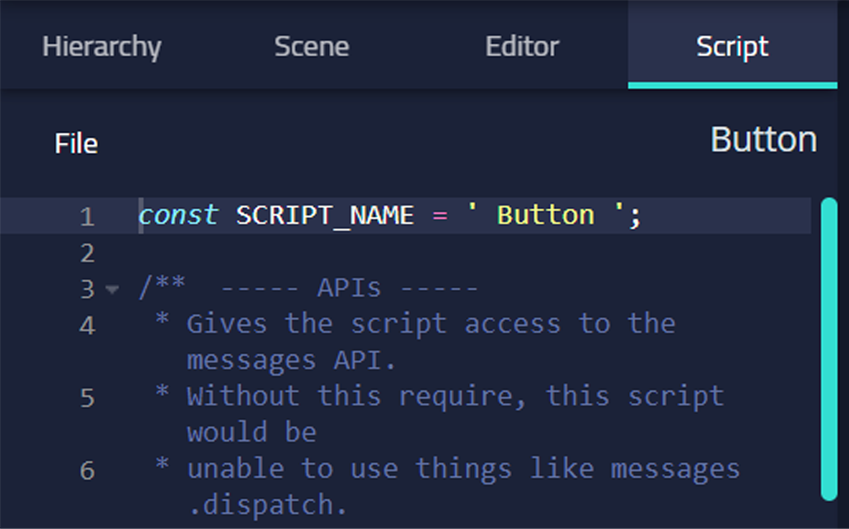 User portraits have also seen an overhaul in 2020.11. Collaborators on an experience can now be identified by the first letter of their first name, as well as by a randomly assigned color.

Does your current workflow make you bounce between Unity and the web editor? Have you dreamt of a world where editing an asset in Unity would also edit that asset in the web editor?

Introducing Enklu Embedded in 2020.10.0! Enklu Embedded allows for users to embed Enklu Cloud content into their Unity scenes. It also enables Unity developers the ability to sync 3D assets from Unity back to Enklu Cloud.

With Enklu Embedded, Unity developers can enjoy the freedom of Unity with the rapid iteration and real-time synchronization of Enklu Cloud (talk about having your cake and eating it too!).

For more information on Enklu Embedded, check out our official guide here.

New to Enklu Cloud is Web Play Mode! Web Play Mode allows you to test your experience directly from the web editor, without needing to wear a headset. You can switch to Web Play Mode via the Play button at the top of the canvas.

Web Play Mode comes in two varieties: Popup and Embedded. You can toggle which one you prefer via the Editor Settings tab (Popup is enabled by default).

Adding collaborators to your project should be easier than ever with our new sharing experiences UX! We've added a new Share button next to your user portrait that will allow you to add, remove, and adjust the permissions for all collaborators on a project.

For more tips on editing collaborators and permissions, check out our official guide on sharing your experiences!

Say goodbye to ambiguous black screens! We've added a loading screen to your project window when initializing a project.

Alongside Web Play Mode, you now have the option to toggle between two button styles in the Scene Settings tab: Default and Web. While Default uses the button style found in the HoloLens, Web displays a more web-friendly format in Web Play Mode. Feel free to try both and see which feels best for you!

Starting with 2020.10.0, we'll be rolling out improvements to our HoloLens editor IUX. In 2020.10, we've made selecting buttons via gaze in-lens more ergonomic than ever before! Your gaze should now "stick" to a button when your gaze reticle is close to it. Additionally, you will now experience less gaze "wobble" than before!

Have you always wanted to add a satisfying glow to your experiences? Or make your scene look like something out of Tron or a video game? Well, you’re in luck!

New to Enklu Cloud this release is our first in-editor, post-processing shader: Bloom! You can access Bloom settings in your project by navigating to the Scene Settings tab, on the left sidebar of the editor.

For more information on Bloom, check out our official guide here.

Finding and editing a script in Enklu Cloud has never been easier with our improved Scripting UI! There’s now a dedicated tab for your Scripts right next to your Assets.

We’ve also reduced the clicks it takes to edit your script, making it even easier to alter your asset’s scripts. Click the thumbnail of the script on an asset, and it will pull it up on the Script tab on the left sidebar of the editor!

Along with Bloom comes a UI revamp of the Scene Settings tab on the Hierarchy Window. We’ve placed each section in their own collapsable menu. This will allow you to find the scene settings you want to change without having to scroll too far.

Experiences with a very large amount of assets should now see a performance boost! Before, rendering performance would degrade as scene density increased. Now, it will no longer add extra rendering complexity past the expected rendering cost of your asset (which is based on mesh or shader complexity).

We've fixed a bug that would’ve disrupted live updating after a device reconnects to Enklu Cloud after getting disconnected from the internet. Users are now notified upon reconnection if any changes have been made while they were offline.

Dark Mode has arrived! All the power of Enklu in a sleeker, more accessible interface 😎 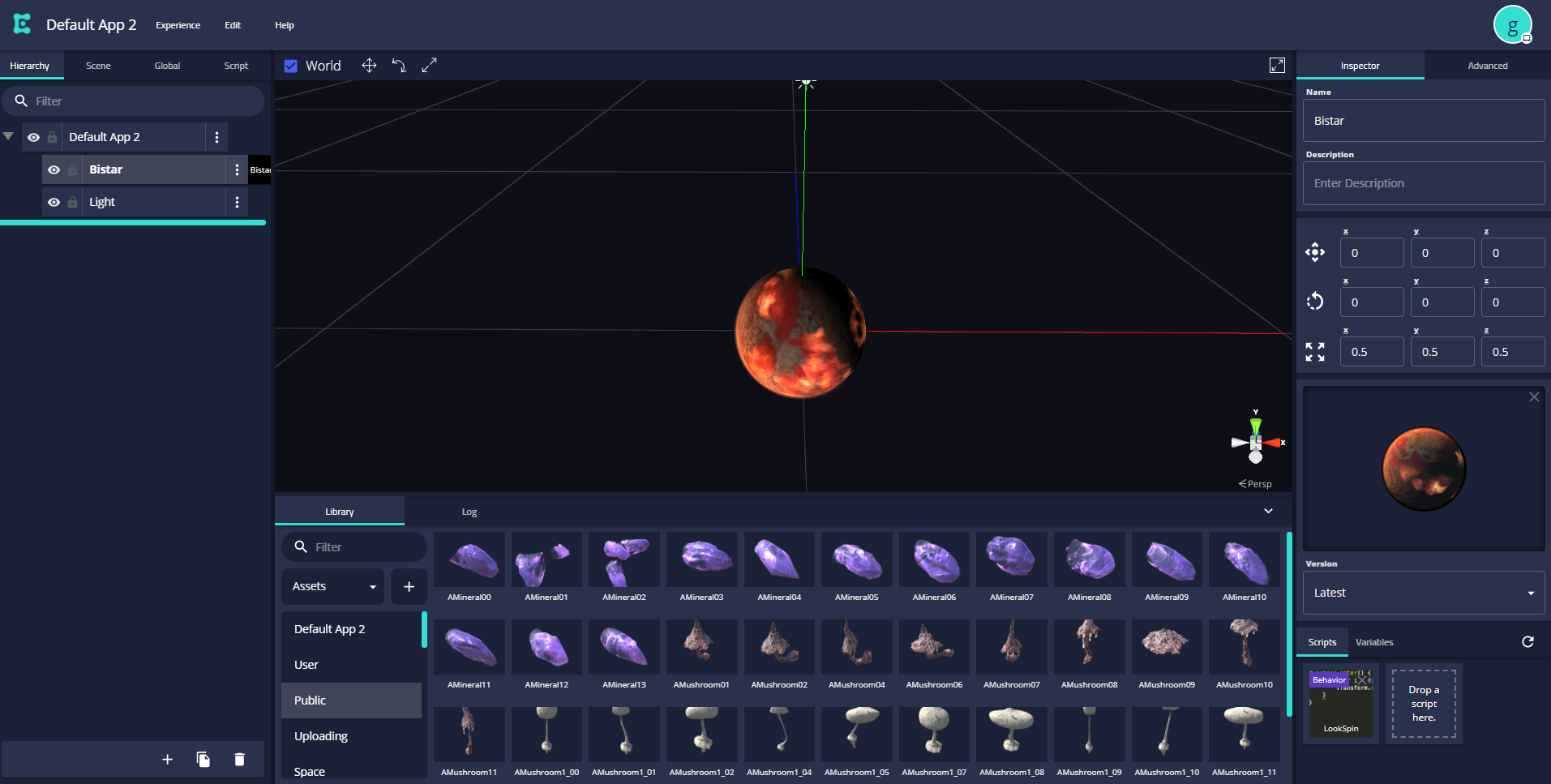 We've made it much easier to capture videos of your experiences -- no code required. You can now start a recording from the main menu (say "Menu" while an experience is playing) or by simply saying "record." Once you've finished, the video will be delivered to your inbox.

You can now stream logs from your HoloLens to the Enklu Cloud web editor. This greatly improves your ability to debug experiences in real time.

On HoloLens 2, hands can now occlude holograms in an experience. This feature is opt-in and can be enabled in the Enklu Cloud web editor.

The new Graphics Scripting API allows power users to interact with your materials and shaders at runtime.

We have created a new Open Source SDK to help external devices communicate with your experiences. Connect buttons, talk to your own servers, or even sync your stage lighting! See our guide to get started.