This is the fourth guide in our Chapters Series. It is recommended to complete the Chapter 3 guide prior to embarking on this Chapter 4 guide.

Chapter 3 taught how to lock and unlock hierarchy elements, change light properties, add effects to a scene, and adjust global settings. In this guide, you will practice using these skills to implement interactions into a scene. 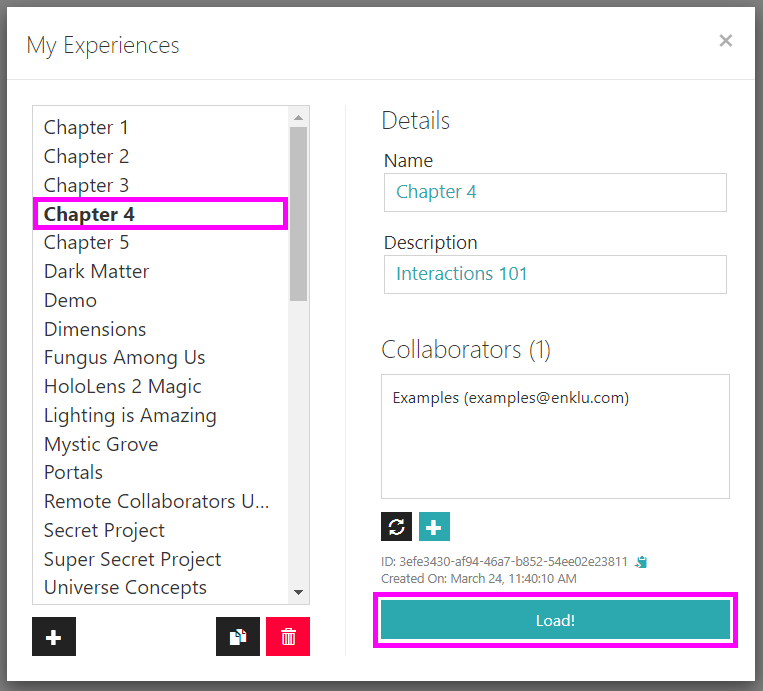 The page will take several seconds to load everything. When the page has completely loaded, you should see the hierarchy panel on the left, properties on the right, and the canvas in the center with a grid, text, and some assets. 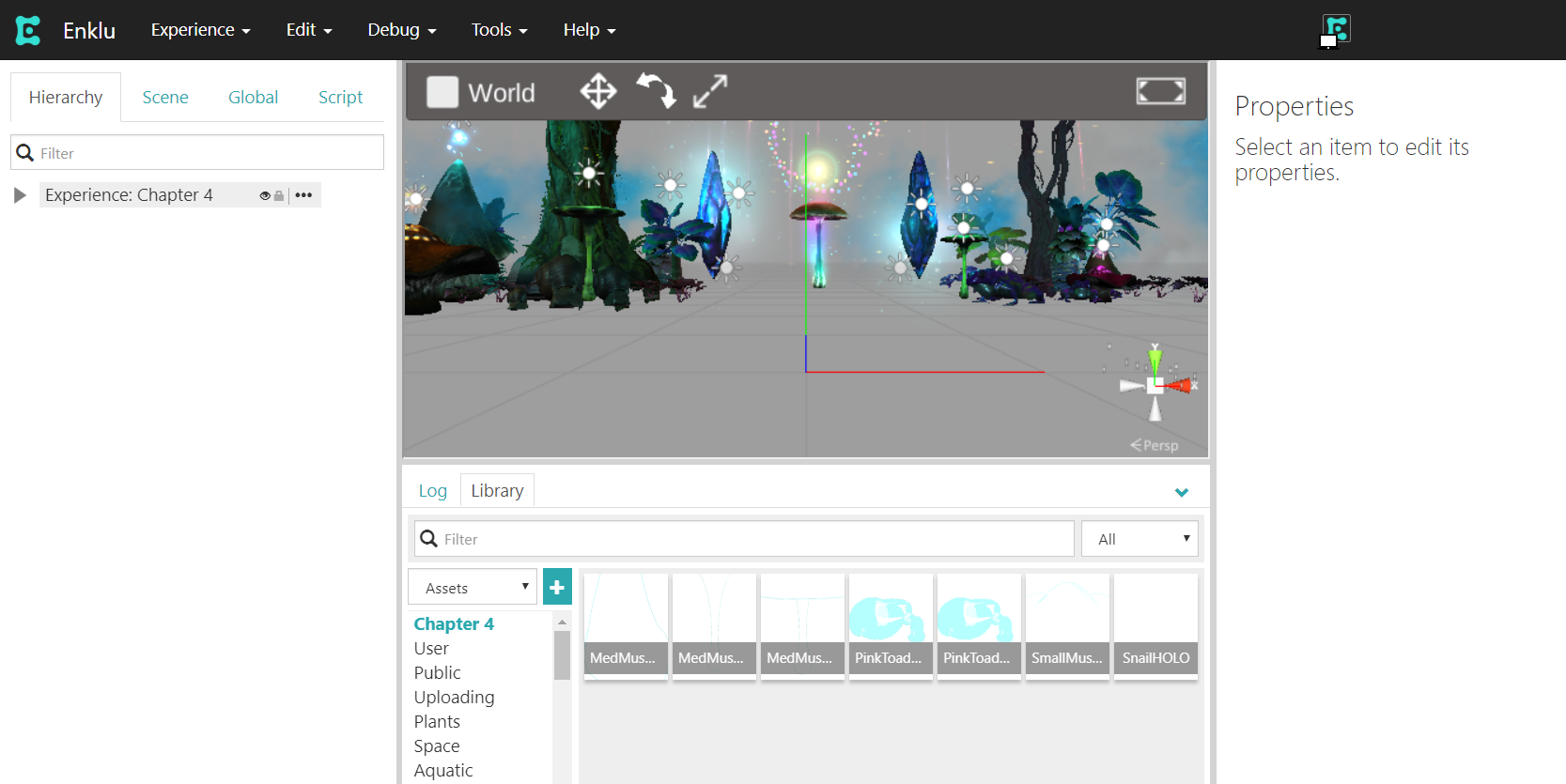 In addition to zooming and panning, you can also tilt and rotate the camera by pressing and holding the right mouse button while moving your cursor.

First, expand the nodes in the hierarchy on the left by clicking the triangles. You will notice the Scene Root element is locked. Unlock it by clicking the lock icon or by selecting Unlock from its element menu. You will see 6 elements nested within the Scene Root element. The main element you will be working with is the Interaction Point element.

To attach a script, you will need to navigate to the Script Library. In the library panel, you will see the drop-down menu is set to Assets. Click the drop-down menu to change the selection from Assets to Scripts. Make sure the Chapter 4 category tag is selected and you will see 7 available scripts to use. Find the script called Pulsate. Click and drag the Pulsate script from the script library onto the script section of the inspector for VISUAL 2. In the canvas, you will see how the RainbowThreads asset reacts to having the Pulsate script attached to it.

Expand the Proximity Trigger element in the hierarchy. You will see 2 elements nested within: On and Crystals. Expanding the Crystals element, you will see 2 elements nested within: Left Crystal and Right Crystal. Practice attaching scripts by attaching the Bob-n-Spin script to both the Left Crystal and Right Crystal elements. After you attach Bob-n-Spin to both elements, look in the canvas to see how the crystals are reacting to the script.

5) Setting Up the Hierarchy for Interaction

Adding the Pulsate script and the Bob-n-Spin scripts to elements shows immediate effects in the canvas. Now we want to create a way user input to affect the scene. First, we will reorganize a few elements in the hierarchy. Within the Proximity Trigger element, click and drag the Crystals element to nest it under the On element.

Once you have finished reorganizing the hierarchy, you will notice that the RainbowThreads and crystal assets are no longer visible in the canvas. This is because they have been nested within elements that have their visibility toggled off. This is intentional as we want these assets to be hidden, until they receive a user input.

Select the Proximity Trigger element. In the library panel, find the script called Proximity Trigger and drag it to the Script section of the inspector. This script will toggle the visibility for nested elements whenever the user is near.

Using a Hololens, a user would touch the rainbow orb to trigger this script. In the web editor, there is a Test Touch variable you can use to simulate a user's touch. After you drag the script to the inspector, click Variables right above the script. You will see a list of all the variables in the script. At the bottom is the Test Touch variable. Click the checkbox to turn the Test Touch on. Then click the refresh icon above the variables list to confirm the variable update in the script. You will see the rainbow orb disappear, a short transition effect, then the RainbowThreads will appear.

Now that you have all these awesome visuals, let's try adding some audio for completeness. Audio assets are as easy to add as the visual assets you've learned how to add. At the bottom of the hierarchy you will see an element labeled Global. Expand the Global element to reveal an element labeled Audio nested within. Clicking on the Audio element, you will see that it is empty. Navigate to the asset library and select the Sounds category. Click and drag whichever sound asset you like onto the Audio element.

If you have sound turned on in your web browser, you will hear the audio you have selected play. You can mute the audio by turning off the visibility of the Audio element.

Congrats! You have reached the end of Chapter 4! You are now equipped with the knowledge to navigate the script library, attach scripts to elements, simulate user interactions, update script variables, and add audio to your experience.